Hiding behind the notion of control 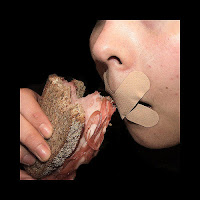 I’ve recently done some thinking about control. In my “old life” I was a complete control freak. Before my wedding to my first husband I even controlled everything about my bridal shower. I was so picky about the decorations I went out and bought them myself. I wanted everyone to wear pink and only pink. And the wedding itself was even worse with all the details that I was obsessed with.

In the last 10 years or so that I have known someone or known of someone with an eating disorder, I have always thought it was about control. I would think about the persons life and see something going wrong- a dysfunctional relationship, perfectionistic traits or just plain unhappiness. It made perfect sense that someone with disordered eating (weather it be calorie restriction, purging or binge eating) and/or exercise was really the persons way of controlling something in their life. And in this case it was the food they put in their mouth and their weight. For me, I don't think it was something I ever analyzed when it was happening, but it started out as something I thought I could control. I controlled what and when I ate and how much (that was the most important part). I controlled how much I exercised, therefore I controlled how I looked. Unbeknownst to me, my disordered eating and exercise took control of me. Very, very quickly.

I was having a conversation with a friend of mine, Kendra Sebelius and I asked her what she thought of this, having experience in recovery herself. I asked her if she thought that people with disordered eating that tell themselves and others that their issues with food and exercise are their own way of being in control is actually bullshit. I thought it was and wondered if she agreed. She had been doing some reading about this particular topic and told me, “if you have to control something, it is out of control”. And I totally agree. She went on to say,

If they [people with disordered eating] only could control the other people in our life, control external stress, control work, control life – THEN our life would be “perfect”… it's once you say you are powerless – over people, things, situations, that is when you recover. The illusion of control is false in all aspects of addictions, and it is often misplaced on external issues versus internal strife. I don't think it ever controlled anything for us – it always controlled us. It became a coping skill to CONTROL the outside things affecting us. A very self centered approach, in my opinion. We care only about ourselves, this illusion of control – thinking if things are in control will mean we are OK. We can not control an eating disorder, just as people can't control drinking – the whys are bullshit. We could be addicts, impulsive by nature, come from shitty pasts etc. It is an illusion – a big fat smokescreen. it becomes the red herring – a way to AVOID the actual issues. A way to place blame & make excuses.

For me, it wasn't until I was well into recovery (in many aspects of my life) that I realized that saying my disordered eating was something I had control of was total BS. The outcome that I wanted- perfection, thinness, beauty, the illusion that I was strong- was all something that controlled me. It had a grip over me that was suffocating and it lied to me. The feeling of power that I had when I could restrict my eating and the feeling of superiority of watching my body change was enormous, but both of those things were very temporary feelings that I constantly had to think about and work for. I've also come to realize the control was something I thought I had over others. My ex would make comments about the way I ate (not how much I ate, just that I should eat healthier), so I would binge just to spite him. Many times he would never even know. It was my way of hating him. The illusion that I had control of my life because I could control my eating and exercise then led me to believe that if I let that go, everything else would fall apart. It would be like falling down a ski slope with no hope of stopping. And there was no way I was going to let that happen.

Years later, through many experiences, therapy and other ways of healing, I have come to know that real life is monumentally better than a life that I thought I had to control. When making plans for my baby shower my mom kept asking me what I wanted at the shower. A theme, colors, etc. I told her I didn't care, that whatever she thought was fine and I would be happy. I said, “Mom, I'm not ‘that girl' anymore.” She half-jokingly replied, “Thank GOD!”. We both got a laugh out of that.
If you or someone you know is struggling with an eating disorder, please get help. NEDA can help.