The MOST Important Thing Happy Women Have 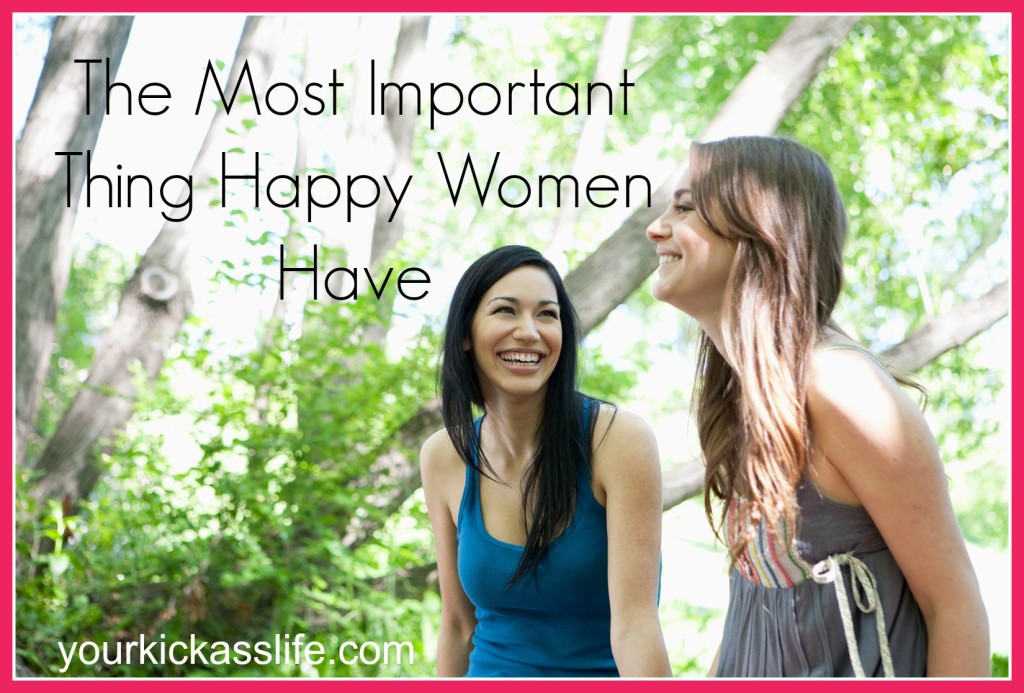 And I’m sure you have friends. We all do. But, I’m not talking about the girls from college that we touch base with once a month. Or the friends that we consider “good friends”, but we don’t trust them enough to tell them the really hard stuff going on. I'm talking about the kind of friend that we trust with all of us. To fully see and hear us no matter what we're sharing with them.

I wrote to you a few weeks ago about isolation and it struck a chord with many of you. You keep telling me that you keep things to yourself, you don’t want to “burden” your friends with your problems, you think they don’t have the same issues you do, and you’re afraid of being judged or criticized. Just so you know this is really, really common, but not helping you at all to live a wholehearted, kick-ass life.

And as I write this, I’m thinking I need to back up and tell you what a really fulfilling friendship looks like…

Fulfilling friendships are reciprocal. You both make an effort. You make time for each other. Period.

Fulfilling friendships are in a place where you can come to each other if you’ve been hurt. Not from a place of blame and shame, but from a place of, “Hey, you probably don’t know that you did this, but this happened and it really hurt.” Instead of holding it in and feeling resentful about it.

Here’s a real-life scenario: A couple weeks into the school year it was my daughter’s birthday. She had the day off from pre-school, so we spent the day together having lunch and shopping. That afternoon my phone rang and as I grabbed it, I saw I had two missed calls from my son’s school. I answered and it was his teacher. “Mrs. Owen, Colton is here in the school office. We had a half-day today, the bus dropped him off at home and no one was home. The bus brought him back and he’s very upset. Can you come get him?”

INSTANT SHAME. (Insert feeling like the worst and stupidest mother on earth). Not to mention we had just moved there and in my last encounter with his teacher I was very frazzled. She probably thought I was The Idiot of All Idiots.

Later on I called my best friend Amy. (Note: for some of you if something like this happened, you would feel so terrible about it, you would tell NO ONE. ← This doesn’t help you. It creates more shame, negative self-talk, and unhealthy behaviors). And Amy responded with something like this:

“Wow, Andrea. I’m sorry that happened to you, that sounds like a terrible moment. I so know what that feels like to forget something major and feel like a bad person because of it. Are you okay? What do you need from me?”

Now, here’s how she could have responded (and I’m telling you this because these are common— I’ve responded this way in my past friendships and had people respond to me this way):

In that moment of telling her my story, all I wanted was to be seen and heard. All I wanted was empathy. Because like I’ve told you before, all of us want two major things in our life: LOVE AND CONNECTION. And we can get both of those with empathy. Both providing it and receiving it. With empathy, we don’t need to relate to the story’s details. We just need to understand what the other person is feeling. Amy has felt shame, guilt, and frustration before. All she had to do was tap into that feeling and make me understand she knows how I feel. That’s it! I don’t need her to fix it (she can’t), I don’t need her to make it seem smaller (it won’t), and I don’t need her to kick anyone’s ass for me (I don’t need her in jail). All I need is someone to see and hear me.

And that, my friends, is living a kick-ass life.

And P.S. as humans, we don’t always do this perfectly. Empathy is a practice. I get it wrong sometimes, so does Amy, and so will you. But the beautiful thing is that we can go back and try again. So, if you’re thinking of someone that shared an important story with you and you didn’t respond with empathy, you can call them today and start with, “Hey, remember when you shared that story with me? I don’t feel like I showed up for you. I’d like to try again if you’re game…”

Want to practice this and more? Join me and many, many other women just like you in this free, virtual event. The Kick-Ass Courage Project: 7-Day Challenge. We started yesterday, but you can easily catch up! Click here or the image below…