Reflections on 3 Years of Sobriety 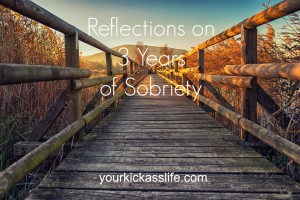 I considered not writing about it this year, thinking to myself, “Well, nobody needs to hear about it anymore. They know you’re an alcoholic in recovery.” I wrote about it on my 2 year anniversary and thought maybe that was good enough. And then on Friday I got an email from a friend that needed to talk to me about her drinking. And a few weeks before that another friend asked me if she could give my contact info to her friend who needed support. Both of these women are moms, both of them needed help. And neither of them would have known I could help them if I had never come out with my story in the first place.

So, I speak again.

A couple of weeks ago I was at meeting at my son’s school. We’re brand new to this school having just moved to this state in late August. He’s in first grade and has high functioning Autism. I sat in a conference room with his teacher, the special needs coordinator, and school principal. It was nothing new, I’ve had these meetings before. But, this being a new school we had to go do the typical paper trail, have witnesses, and sign papers.

The special needs coordinator led the meeting and was reading parts of his file aloud, and as she read his report given to us the year prior from the psychologist she got to the part about his diagnosis and family history. “Colton’s mother was diagnosed with Anxiety and Panic Disorder in 2002 and has a history of substance abuse”. She continued with other facts that had nothing to do with me and the meeting continued as normal.

But in that moment I felt like I’d been punched in the gut. “Has a history of substance abuse.” Instant shame washed over me. chalk that up to a please-let-the-floor-open-up-and-swallow-me moment. I immediately wanted to interrupt her and explain myself to these people– these three women I barely knew. The principal with a PhD, my sons teacher, and the pregnant special needs coordinator that just 20 minutes before laughed with me as we exchanged funny pregnancy stories. I wanted to tell them, “Well, ‘substance abuse’ doesn’t really describe ME…I mean I wasn’t a drug addict or anything, just wine. And beer too. Oh, and I’ve been sober for yeeeears now, and I was never like ARRESTED or anything like that. Yep, just too much wine. So, see? I’m good. Not bad at all.”

Which at that time would have been a bit weird and uncomfortable.

And I’d love to tell you that since I do what I do for a living, and because of all the work I’ve done on myself and continue to do, and because I speak publicly about my journey that now I’m immune to the shame. But, I’m not. I don’t know if I’ll ever be. If she’d said, “Colton’s mother has a history of high blood pressure” I would have felt no shame. But, to be outed as an alcoholic in front of people you don’t know, where you worry you’ll be judged, or whispered about, it’s hard stuff. I don’t want to be judged. I don’t want to be known in my community as “the lady with a history of substance abuse”. I know it’s not really who I am, I know this in my heart. But, still after 3 year of being public with my story, I still feel fear and shame.

You might be wondering if it’s gotten easier. Yes, it has. I think in that conference room the shame was so visceral because it took me by surprise and I already felt vulnerable not knowing anyone in this new city. Plus, we were talking about my son, so it was the perfect storm. As the last few years have passed it’s gotten easier to talk about, but it certainly depends on the situation. And I think that meeting reminded me how painful it can be for people new to sobriety or thinking about getting sober.

And that’s really what I wanted to talk about today. That intense shame can keep people drinking for years, decades even. Can pull them back into drinking after years of sobriety. Of course other factors come into play, but shame can cripple us. Years ago had I felt shame like that I would have just drank it away. Went and hid in a bottle of wine where the shame would have been suffocated for a few hours that evening, only to wake up again the next morning so the cycle could continue. Same shame and fear and thoughts revolving around drinking. It was the same feelings every day.

And when you’re an alcoholic thinking about getting sober, you have to weigh those two painful things out: Quit drinking PLUS deal with asking for help, going to “those meetings” where “those people” are and actually talk about it all (scary), or continue to drink when you’re pretty sure that it’ll get worse and continue the cycle you already hate (also scary).

For me, I had to reach a point where the latter was scarier. Lucky for me, I only stayed active in my alcoholism for a short time and I was blessed to have people in my life I trusted to reach out to for help. I knew where I would end up and that scared me more than anything. I knew alcoholics only go one direction: worse. I knew I had to quit.

Does the shame hit me every day? Certainly not. But, I know I can do hard things. You can too. I survived. And I’ll be okay. And I hope if you’re reading this and you think you need help, you ask for it. Shame will keep you sick. It won’t go away, but you can walk through its shadow and ask for help.