When being slapped is a good thing

Have you ever had someone tell you something about yourself, that was so painful at the time, and then later, you realized they were right? But, at the time, it felt like such slap in the face. Maybe you imagined hitting that person in the head with your shoe. Or worse.

When I was 19 years old, an ex-boyfriend of mine wrote me a letter (before internet, can you imagine?) and told me I should get off the pedestal I had put myself on.

When I was 26, my therapist told me I was a control-freak.

When I was 30, my best friend told me she needed a break from me because of all the drama I had in my life.

Oh, the horror. The embarrassment. The shame. All three of these things have stayed with me partially because they hurt, but mostly because I learned to be a better person because of them. It was hard, it took time, but I’m grateful for the honesty from them, the growth and learning.

So, what is going on in your life that someone might call you out on?

Are you paralyzed in fear somewhere? Are you staying in a bad relationship? Do you spend hours talking and talking about what you want to do, but do nothing about it? Are you tolerating and allowing nothing but crappy circumstances?

Because here’s the thing, sister. There will come a day, when you are so sick and tired of being sick and tired. Tired of living a half-life. Sick of putting up with crap. And when that time comes, what would happen if it were at the end of your life? How would it feel to know you are exiting stage left in this one-time-only performance of life, and you gave a half-assed effort?

Every day that you spend wishing and hoping, every day you make excuses based on fear, there’s another day gone where you could have taken a step in another direction.

Here's one of my favorite quotes: 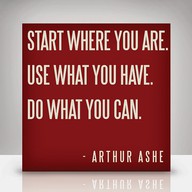 Simple. To the point. Doable. Again, you don't need to put on some blue tights and be superman. Although blue tights would be fun.

Notice where you are (anywhere is perfect). You have an able brain, a heart and soul that are trying every day to tell you what you want. And if you stop listening to that lying inner-critic, you'll know what you can do.

In the comments, feel free to tell me what you think is in your way. I'll reply as best I can. With my blue tights on.

It's here. It starts march 8th. Join us.