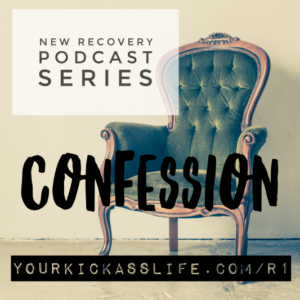 This is the first in a ten-part series I’ll be hosting on alcoholism and recovery. If you don’t want to miss the rest of the episodes, make sure you sign up here to be notified when a new one comes out.

My stomach lurches as I begin this post. I considered not going public with this, but that damn intuition of mine had other ideas.

If you’re anything like me, when you hear the word “alcoholic”, you get that vision of the homeless man in the gutter, drinking from a paper bag, or maybe the leathery skinned, worn-out woman at the bar, falling off the barstool, or any other pathetic image you conjure up. Not often do you picture a successful life coach, living a great life in the suburbs. And that story is a big part of what kept me drinking.

I’ll start by backing up. My battle started in my late teens with love addiction. When I was 25 my struggle grew into an eating disorder, and thankfully I got help and healed from those when I was 31. It wasn’t until years later that I realized and admitted the eating disorder was bad enough that it could have killed me. To add fuel to the fire, when I was 26 I was diagnosed with severe anxiety and panic disorder, which at that time, was being helped with medication prescribed by my doctor.

Throughout my 20’s, in terms of drinking alcohol, I was a “normal” girl . I drank socially just like all my friends, but could always put down the bottle without a fight. Sure, there were episodes where I made bad decisions (does anyone make good decisions drinking?) and had some embarrassing moments, but nothing so humiliating to write about. Looking back, I believe I didn’t need to rely on drinking then to cope, because I had my eating disorder to fall back on, as well as an addictive relationship with my ex-husband. Those behaviors fed the addict me and I didn’t yet need alcohol to numb me.

Upon recovering from the eating disorder and love addiction, I skipped along into my new life with new tools and thoughts to cope without turning to a relationship, a man, or my eating disorder.

When I was well into recovery from those two addictions, I was so proud and happy. I was convinced I was finally “mentally stable”. But, little did I know, my alcoholism took its place. Quietly, it snuck in like a lethal, poisonous gas that I couldn’t see. I really had no problem quitting drinking when I was pregnant, but after the birth of my second child in 2009 is when my drinking picked up serious speed and momentum.

I found myself drinking nearly every day. And the days that I didn’t, it was to prove to myself that I didn’t need to. See? I could skip a day. I’m okay. When attending social events my mind revolved around alcohol. I was constantly thinking about how full my drink was, if anyone noticed how much I was drinking, if I needed to cover up how drunk I was getting, how much more time I had to drink, and so on.

After about a year of this the whispers in my head started.
“Normal people probably don’t do this.”
“Do I need to cut back?”
“This probably isn’t good.”

In December of 2010 I remember one evening finishing an entire bottle of wine in one evening by myself. Granted, I know there had been plenty of times I’d drank 4 + glasses of wine in one evening, but never by myself at home. On a weeknight. I was so ashamed and swore I would cut back. The next morning at the grocery store I proudly passed the wine aisle and didn’t buy any. By 4:00 that evening the anxiety had risen in me and quickly brought myself and my kids back to the grocery store to get a bottle. Because I deserved it. Because I had a long day. Because I would only have one glass while cooking dinner. I ended up drinking 3 glasses and was proud of myself for not drinking the whole bottle.

Soon after that, an entire bottle was pretty regular. I started hiding how much I was drinking from my husband, and pretty quickly the obsession started of hiding, worrying, and wondering what I should do. This was a living hell. The more that I tried to not think about drinking and the feelings that surrounded it, the worse I felt. My first thoughts in the morning were guilt and shame about how much I drank the night before. Then the thoughts would move to planning on cutting back. Then wondering if I have a real problem. Then justifying my drinking. More guilt and shame. Each day the afternoon would come and I would watch the clock waiting for an “appropriate” time to pour my first glass. The times were getting earlier and earlier. If I remember correctly, my earliest drink was 2:30 pm.

And the whispers got louder and more clear:
“Normal people don’t do this”
“Why can’t I stop thinking about this?”
“I think I have a problem”

I googled, “Am I an alcoholic?” I hoped Google and the internets would magically pop up a “YES!” or “NO!” on the screen instead of a bunch of links. I kept reading, “Only you know if you have a problem” and I wanted to scream. Mostly because I DID know I had a problem. However….. I was paralyzed with fear to quit drinking. I could not imagine my life without alcohol in it. I mean, I LOVE alcohol. I’m good at drinking. And, at the same time, there was a large part of me that was convinced there was NO WAY I could be an alcoholic. I mean, have you seen the show “Intervention”? Did you see the episode of Oprah where the mom was hiding bottles of Chardonnay behind the kitchen trash and laundry room? That wasn’t me! That’s an alcoholic, right? And I JUDGED those women! But the whisper in my head politely tapped me on the shoulder and reminded me that those women were once where I was at that moment. They didn’t just wake up one day and start hiding booze. But, I kept justifying my drinking. I was never drunk when I drank at home alone. I never drove, I never lost control with my kids, I never yelled. We had a house in the suburbs, 2 cars, 2 kids and my marriage was actually pretty good. How could I be an alcoholic?

And no one knew. No confrontations, no raised eyebrows, no one told me I should cut back. But, the hiding was becoming a full-time job. And one that I didn’t want anymore. So, if no one knew, and I was doing a good job of controlling it (or so I convinced myself), then I didn’t have to quit. Right? I mean I didn’t have a “rock bottom” that we always hear about. My life was great. All I did was drink too much. No DUI’s. No arrests. No tragic story whatsoever.

Well, I did some research. Not the college term paper kind, but just read blogs of women in recovery, and talked to some girlfriends who had gotten sober.

Here was my turning point: I admitted that what was happening to me was happening fast. And it was out of my control. My drinking wasn’t yet out of control, but this progression was. There’s an ancient Chinese proverb that says, “If we don’t change our direction, we are likely to end up where we are headed.” And I knew exactly where I was headed. My intuition, the whispers, were speaking more loudly at this point. I could. Not. Lie. Anymore to myself. I has just started my business and I felt like such a hypocrite writing and telling people how to live their best life. Their “kick-ass” life for Christ’s sake. And I was lying to myself every day. And numbing the pain with alcohol.

I knew I had 2 choices: Keep drinking and see what would happen. Or, quit drinking and see what happened. I was pretty sure I was an alcoholic, and true alcoholics don’t get better if we keep drinking (no matter how desperately we try). We just get worse. I was more terrified to see what would happen if I kept drinking, than to try sobriety. That was all I needed to realize to reach out and try sobriety.

And so I quit.

And it hasn’t all been easy. Some days are, and some aren’t. As time has gone on, the days are easier and now I can't imagine my life if I had kept up the progression. But, I can’t think about the rest of my life without alcohol. I just can’t. Every day I make a decision and commitment to stay sober that day. Just that day. I’m human, I’m an alcoholic and that’s all I can do.

*In the audio version of this post I go into more detail about my current recovery and what I’ve done over the last 5 years to stay sober and practice recovery, as well as questions to ask yourself if you think you have a problem.

Did you like this post? This is the first in a ten-part series I’ll be hosting on alcoholism and recovery. If you don’t want to miss the rest of the episodes, make sure you sign up here to be notified when a new one comes out.

Resources:
Find a 12-step meeting in your area
Smart recovery
Women for Sobriety
The Bubble Hour podcast and blog