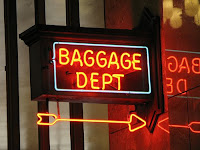 In early 1994 I sat in a therapists office for the first time. I don't remember how my parents talked me into going, but there I was, 18 years old, a couple of months after I found out my parents were officially getting divorced. I was stone faced, arms crossed over my chest. The therapist was very nice, drinking her tea and her first question was, “Do you know why you're here?” I can't remember how I responded exactly…but casually told her I came because my parents wanted me to and that they wanted to make sure I was “okay”. I spent the rest of the hour telling her, “I'm fine”, “It doesn't bother me”, and “I'm totally okay with it”. And I clearly remember never, ever shedding a single tear. I was tough. I was strong. And no one would think otherwise. I had a few more unproductive sessions with her and the only thing I remember (and was very proud of) was that I never cried once.

The only person that saw any of my inner turmoil about it was my then-boyfriend who later became my husband (then became my ex-husband). He was 19 at the time and did not sign up to be the one to take all of my messiness on. I told no one but him. I guess at the time he was the only one I trusted to still love me even though I was such a mess. I expected so much from him and at 19 years old, he gave me as much as he could, which wasn't a whole lot. And when he didn't provide for me what I needed, I was wrecked. I had no coping skills. I would rather die than have the world see me fall apart, so I stuffed it all away and told everyone “I'm fine”.
Now I know why they call it “baggage”.
I carried that shit around for years. Taking it out on my boyfriend who encouraged me to talk to someone, anyone (besides him) about it all. But instead, I stuffed my bags as full as they would go and carried it around until I was too tired and too weak. Finally, one day I snapped and it all came crashing down in my doctors office in 2003.
During those teenage years I had no idea what perfectionism was, that I struggled with it or that it was even a bad thing. In my mind I thought if it all looked great on the outside then it had to be okay on the inside, right? I mean, everyone else had it all together, so it was imperative that I did too, whatever the cost. I was disgusted at weak people and thought people that had hang-ups really needed to get over it, and themselves and simply move on. Seriously, I thought that. And now, today I see people that think that way and my heart goes out to them, only because I know they are struggling with their own baggage, their bags are spilling over and they are getting tired. I wonder how much more they can take. How many more times they can roll their eyes at people that have struggles and difficulties and that are simply just human.
Through my own experiences I've learned that it's okay to ask for help. To say that you're overwhelmed, hurt, afraid or confused. Or tired and need a break. Or whatever. No one is perfect and feels nothing. Transparency is beautiful. It doesn't make you weak or a baby. I don't apologize anymore for it. And my baggage is unpacked.
Photo courtesy of Noel Zia Lee
Like this Post?
Sign up for updates!