Why I left a promising corporate job 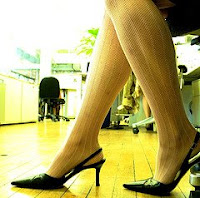 Eleven years ago I graduated with an Associates Degree in Fashion Merchandising. I guess at that point I had been floundering around and didn't know what I wanted to be when I grew up and I knew I liked fashion, so I assumed that was the answer. I beat out 4 other girls I was interning with for a position at the corporate office of a chain of 40+ surf shops. The position was a floater so I learned all aspects of the company and a few months later a position opened up as an Assistant Buyer for the Junior Division and it was mine! I had become friends with the girl that had left that position and heard her horror stories about it, but I thought she just couldn't cut it. This was the opportunity of a lifetime. If I could make it a year there, I could easily go to another company and in 5-8 years be a buyer myself. I envisioned myself like Rachel Green on Friends, working for Ralph Lauren in my big corner office.

My boss, who was the buyer for Juniors, swimwear, accessories (which included shoes), little girls and the company's own private label which included designing and having the merchandise manufactured. So, needless to say, she was completely overworked. I was her only assistant, there was no data entry person and my responsibilities were endless. I won't go into all the gory details of the time I was there (I stuck it out for 10 months), but I'm sure you've heard the term “Shit rolls downhill”? And I was at the bottom of the hill.

It was stinky to say the least.

I struggled daily with not knowing if I just wasn't good enough or smart enough for the job. I was so stressed it was affecting me physically and it didn't help that morale there sucked. I took a good look at the people there that held the top positions and made the most money. I didn't like what I saw, they were slaves to the company and I knew I had better get out before I was one of them. I hated who I was there and more importantly: At that time I hated my place in the world. When I gave my notice, the vice president of the company, a person whom I equally admired and feared called me into her office and berated me until I broke down and sobbed right in front of her. She couldn't fathom why I would leave a job that a million girls would kill for. I didn't have the balls to tell her the truth: That everyone there was afraid of her, everyone was overworked and that she was, well, a bitch.

The day I left I wrote myself a letter entitled: “If I ever think about coming back, read this”. I thought I might later regret my decision based on the potential to move up there and beg for my job back. The letter detailed how I felt, how miserable I was and how the job had effected not only me, but people I was close to. After I left the girl that replaced me only lasted 3 months, so they hired 2 people to fill that position and a clerical.

The experience I had was only with one company and sometimes I wonder if it would have been different had I just gone to another company and kept trying until I found a place that had the same values that I did. At that time I was young and just ran away as fast as I could without looking back. Eight years later I found myself in the corporate world again at the American Council on Exercise and was so happy to have found a company that fit me. On the other hand, there wasn't a whole lot of potential to move up there, so perhaps it's better that I'm not there anymore either.

It took me several more years to find where my place on this earth is and I'm still working out all the kinks. But leaving my first corporate job was the start to my journey; to find out what my mission was in this life. I'm not saying corporate life is terrible and no one can find their passion in it, but it just wasn't for me.

I would love to hear if anyone else had an experience where a job, or even a person that made them miserable made them realize they were not in the right place, but leaving made them a better person.

Photo courtesy of flickr.com from trixiebedlam