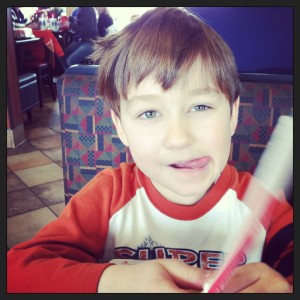 I’ve gone back and forth with whether or not to write about my son. As you all know, I’m no stranger to vulnerability. I have no problem writing about my own life and struggles in order to help others, but when it comes to my children, there is a different mama bear aspect thrown in of fierce protection of them.

But upon thinking about it, I realize that what I want to write about isn’t so much about him, it’s about me. And so here it is.

My son has Asperger’s Disorder.

He’s my only son, my first born.

I can finally say it out loud now without my voice catching in my throat. It all started months ago in November. My husband, his pre-school teacher and myself had been wondering what his behavior problems at pre-school were all about, after years of wondering why I felt like he was different, wondering if I was just crazy…we got a call from his pre-school teacher. We had been having regular conversations trying to work together to help my son. There was no pattern to his meltdowns and outbursts at school and we were both frustrated. I was standing at the kitchen sink peeling potatoes while I spoke with her. As I stood there telling her I didn’t know what to do anymore, a potato in one hand and the peeler in the other, she said, “Andrea…I’ve been wanting to tell you this for a couple of weeks now. I think Colton’s behavior is symptomatic of Asperger’s Disorder and you should have him tested.”

I stopped peeling the potato and looked out the kitchen window in front of me. I don’t know how long I didn’t speak and I don’t remember who spoke next. My husband had just come home from work, the water was running, both my kids were running around playing and the TV was on. But, I didn’t hear any of it. A thousand thoughts flooded my head and I felt like time stopped and all I could hear were my thoughts.

There is no way in hell Colton has Asperger’s.
Oh my God. Not my baby.
What does this mean for him?
Will he be okay?
Nope, there’s just no way. We can fix it.

And mixed in all of that, I felt a strange sense of enormous relief. It all made sense. His intense focus, bordering on obsessions. His lack of eye contact. His love for rules and routine. His lack of empathy. His delayed motor skills. His lack of affection.

For the first time, I felt like there was a chance I wasn’t crazy when it came to my son. That my feeling like he was different might be validated.

Fast forward four months later and what seemed like an endless whirlwind of tests, it was confirmed that he’s on the spectrum.

It’s interesting when you are on the outside of a particular group of people and you wonder what it might be like for them. Like people that have lost a spouse. I always wonder what it’s like to suddenly find yourself asking for support from other people that have been there. To have always been an outsider to them and suddenly you are one of them. But, I could never imagine myself there. It was that way when I got sober. Never in a million years would I think that I would be reaching out to other people who identified with being a sober alcoholic. And here I am. It’s the same with this. As I find myself researching and speaking to people with children on the spectrum, it’s still a bit surreal.

Now let me pause for just a moment to tell you something you might be thinking that I know to be true: I know my son will be okay. I know that we, the Owen family, will be okay. I know he is still Colton, and he’s still the same son I’ve always had, and in my opinion, I really think that ASD really isn’t a “disorder” at all. My son processes information differently that most of us. That’s it.

But, what I wanted to say in this post is that even after knowing all of that, what I hadn’t expected was the element of grief.

And I know that what he’ll bring us as a child with ASD will probably be better than I ever imagined. It already is.

And there is a big part of me that hesitates to write about the grief because I’ve already been told not to feel that way. And I’ve been told to not be sad because it could be worse.

But here’s the thing…I’m done being told how to feel. And I’m done telling other people how they should feel. If I’m sad that my kid has this diagnosis, then I’m sad. I know it will pass. But, right now, I’m not wrong for feeling this way.

I worry because I'm a mom. I think it's just what we do. I’m just a human being that loves her son that happens to have Asperger’s Disorder. And sometimes it’s hard. And sometimes it’s not. In the end, we all just want the same thing for our kids: For them to be happy and loved and safe. And all I know for sure to be true is what’s happening right now. And wishing I felt a different way, or feeling wrong for the way I feel does me no good at all.