It's that time of year again, girls. We say goodbye to 2012 and hopefully reflect on all the things we accomplished. I did this last year and this year I've decided to do it a bit differently.

I want to say again that this is by no means a brag list. Yes, I'm uber proud of myself for what I've accomplished, but if you read this and compare yourself and start feeling like shit about yourself because you didn't get enough done, I beg you to stop. Every single client I've had and most of the women who sign up for my classes tend to have something in common: they create these amazing and ambitious to-do lists for themselves. Goals, resolutions, call them what you want, but y'all tend to be mega-achievers. I love achievement just as much as the next girl, but here's where it'll bite you in the ass:

Before you move onto the next year, or the next big thing on your list, stop and revel in what you've already done.

I seriously mean it. I don't care if you think it's no big deal or nothing worth noting. And if it makes you uncomfortable to be PROUD of yourself, you've got some inner-work to do, sister.

Now that that's out of the way.

I'm not going to go through every little thing I did, but just the big highlights and things that I really, really wanted. And I'll tell you how I did it. In no particular order…

1. Go to California alone to spend time with my bestie.

Done! It was April and it was my birthday. (I turned 37 in case anyone wants to know). I thought and thought about what I wanted. And what my heart wanted was to be around Amy Smith, my BFF. We used to live 45 minutes from each other, but since we moved the year prior, I am now 13 hours from her. I had major guilt about wanting to go alone, sans husband AND children, but I booked it anyway. But, here's what I really wanted: I wanted the connection of a close friend. A HUMAN, face-to-face connection. I had no idea how the childcare situation would work out, but I stayed focused on the fact that I wanted and needed to have fun and connect.

In the end, childcare worked out perfectly and Amy and I had loads of fun together making ridiculous videos and just genuinely having a great time.

The beginning of 2012 market about 7 months that we had moved away from our home town. I had met a handful of great women that I became friends with, but I was missing out on that core group of women. I guess I assumed we would move, I would find my people right away and we'd skip along in fields of daisies. And that didn't happen. I whined about it to my husband, and my virtual master mind group. I felt so damn sorry for myself. Finally, it was my colleagues that told me to stop crying over it, figure out what and who I wanted, and go out and find them. In other words, take responsibility, get really clear, and only take inspired action. I wanted a group of people that accepted and loved me for bing me. All obnoxious, foul-languaged, and sometimes crazy. Well, mostly crazy.

In August, I found my local roller derby league (something I'd wanted to do since 2006!), contacted them and joined. The end. Oh, and I love them. Those girls REALLY know how to have fun.

Oh, the hubs. I'm lucky enough to be married to a man who loves me for all my energy. I know very well in a relationship I'm a whole lot to handle and before I met him I knew I needed to marry someone who could love me for it. If you have small children, you know that your marriage can be something that gets neglected. Mid-year I had to face the fact that I had not put in much of an effort with him, but was instead focusing on my kids and my business, both of which were going fantastic. I remember being on the phone with Amy and confessing all of this. I said, “Honestly…if I put a quarter of the effort into my marriage as I do in my business, things would be different.” I knew if I did nothing things wouldn't get better on their own. (Does it ever?)

So, I got really clear on what I wanted out of my marriage, what I wanted from my husband, and what I was willing to do to make it happen. It wasn't about date nights…it was about connecting on a deeper level than talking about our kids over a meal at Chili's. We went to marriage counseling which helped us IMMENSLY and I'm happy to say we're in a MUCH better place than we were a year ago.

Ooooh, juicy! I wrote in more depth about this last week, but this was a very important one on my list for 2012. In January I decided to write the book, soon after figured out what I was going to write about and started writing it. In June I started the proposal and now, I've hired a literary agent and we have a deal.

I still freak out a little when I even type all that. And here's what I attribute this goal happening so fast and so perfectly: I focused on what I wanted, acknowledged fear but did NOT let it carry me away, and stayed focused on WHY this is so important to me. I imagine what it will be like to hold my book in my hands. To smell the pages. To see it on a shelf in Barnes and Noble. I've been so sure of this from the beginning. For a while I kicked myself for waiting so long to write it, but the truth is, I wasn't ready. I would have had a really hard time staying out of fear, and I KNOW I would have either quit, or it would have taken me YEARS to complete it and it would have been an agonizing journey. Not fun.

The end of 2011 marked my first full year in business for myself as a life coach. Yee haw! I had flown by the seat of my pants all year and while fun, it was stressful. I hadn't made the money I wanted (although very, very common in the first year of business, I know) and I was tired of things being hard. I wanted to have more fun, take things less serious and I wanted it to be easy. So, I hired a business coach. Jeanna introduced me to “if it's not a hell yes, it's a hell no!” which changed my life and my business.

Long story short, I tripled my income, had WAY more fun, finally have a plan in place that feels good to me and to the future of Your Kick-Ass Life.

Oy. If you don't know, I'm an alcoholic and I got sober in 2011. A goal of anyone in recovery is to stay sober, right? Recovery has many facets that I don't want to get into right now, but a big part of what kept me sober is that I wanted to feel better. Mentally, physically, spiritually, emotionally, morally even. I wanted my kids to grow up in a house without alcohol, without seeing me down 3-4 glasses of wine every night. That thought made me feel happy. For them, for me and my marriage. Sometimes I had to think about that every day. I wanted to be proud of myself. And I can say that after 15 months of sobriety…I am.

The one thing all 6 of these goals has in common is not the strategy I implemented. It's 100% based on where my focus was for each and every goal. The focus was how I expected to feel as a result of each goal being completed. That's it.

In the comments, I'd love to hear what YOU accomplished in 2012! Let's high-five, chest bump, and just cheer for each other!

Wanna learn specifically how I made all this happen so you can do your part in creating the same? Join me starting January 10th for 21 days of learning a new way to achieve your goals! Click here to learn more… 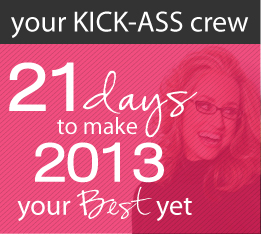