How a Pile of Shit Can Teach You About Life

I admit, I am a powerful manifestor. If you have no idea what that is, basically, using the Low of Attraction, I have been able to manifest what I want in my life. I learned this by realizing I was manifesting exactly what I didn’t want for years. Once I turned things around, everything changed.

I love giving people evidence of this. In fact, I keep an evidence log of everything, big or small that I manifest. I encourage my clients to do the same. It shows us that the Law of Attraction is working for us.

Today I have a little story about manifesting shit. Shitty circumstance you ask? No, literally shit. It went like this:

It had been 2 ½ years since we had family pictures taken. In this picture, my daughter was 9 days old. Being 9 days postpartum, I was feeling anything but sexy. In fact, you can’t totally see it, but I have on a pair of cut-off sweat pants. If that doesn’t say, “J Crew style family photos”, I don’t know what does. 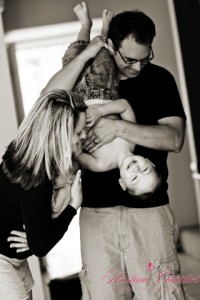 So, finally, I organized family pictures and got us all ready. That day, my husband and I had a disagreement.  That doesn’t happen very often, so when it does, it gets me very out of sorts. I was mad that he was mad about something that I viewed as minor had happened. (Mad that he was mad. Good reason, no?) Didn’t he understand that this was my Mother’s Day present? Didn’t he know that we had to act like we love each other in these pictures? And can’t he read my mind by now? I mean, really.

To summerize, here is a text conversation from that night between my friend Rachel and I: 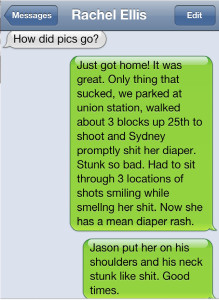 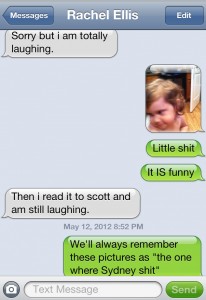 So, my daughter shit her diaper when we got to our first location. Of course we didn’t bring an extra diaper and wipes with us when we walked to this location, about a half mile from our car. Of course we didn’t think she would crap again for the THIRD time that day. And of course it was one of those shits that had seeped into her pants. And guess what color her new pants were? Yep. White.

We considered walking back to the car, but we would lose time and with the lighting all that stuff, we decided to wait. And if you’ve ever taken professional photos, you know the photographer wants you to get close to each other. No, closer. On each other’s laps. Even closer.

The whole time the photographer was shooting, my husband is muttering, “Holy crap, Sydney. You are ripe.” Or “This is probably the worst damn diaper I’ve ever smelled.” Those are the EXACT things you want to hear when you’re trying to look like a family that loves and adores each other, right? Snuggling, kissing, laughing and smelling shit.

Moral of the story- I manifested this. Now you might be thinking, “Lady, do you really think you control your daughter’s bowel movements?” Well, yes and no. On a regular basis, no. But, that day, yes. I was focusing on the situation not going in my favor. Focusing on the fact that this was NOT how I had wanted it to happen. If it had only been a different way, I would be happier.

The way the Law of Attraction works is that you get back what you’re focusing on.

So, next time you’re focusing on what you don’t want, don’t be surprised if you somehow get a big pile of shit in your face. 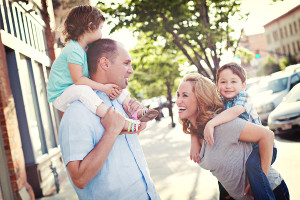 Here we are laughing about my husband's stinky neck