How pregnancy has helped my relationship with food 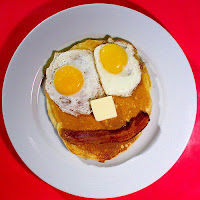 In the past few months I've talked a lot about eating disorders and my own struggle with disordered eating and exercise. I've had to really think about my relationship with food and quite honestly, I thought it was a crock that people even had a “relationship with food”. I thought that was only for over-eaters who used food as a coping mechanism or for other various reasons personal to themselves. Then I took a good, hard look at how I viewed food and realized that it probably wasn't the healthiest. I have a history of sporadic bingeing and purging (either vomiting or exercise, or both), and would ration the amount of calories I would eat every day. For instance, I would starve all day if I knew I was going to go out and have a big dinner with friends. And when I lived alone, I would look forward all day to coming home and eating an entire pizza all by myself. It's laughable that I thought I didn't have a terrible relationship with food.
When I became pregnant in early 2007, I truly felt what it was like to be hungry. Yes, I'd been hungry before, very hungry, but the kind of hunger that wakes you up in the middle of the night and speaks to you. Literally, I would have to get up out of bed and get a snack because I was so hungry. So began the “eat when you're hungry” notion.
Wow, it was just that easy.
At that point in my life I was just beginning to honor my body by listening. Listening when I was tired and truly needed to rest instead of exercise. Listen when I was injured and needed an ice pack or a doctor instead of pushing to run more miles. Listening and enjoying how good it felt to be fit for reasons of taking care of my body and nothing else. But food, eating and nutrition were still confusing, somewhat disordered and the last thing to fall into place.
When I was pregnant, I truly had to listen to my body when it came to feeding it. I was lucky the first time in that I had minimal morning sickness, and quickly I learned that I had to pack with me snacks to be able to eat at a moments notice. One minute everything would be fine and the next minute it was like my body said, “IF YOU DON'T GET SOMETHING IN THIS STOMACH IN 10 SECONDS ANY STOMACH ACID YOU HAVE WILL BE COMING OUT THE FRONT DOOR! 10….9…..8….7….” And the dry heaving begins. I am not exaggerating. If you've ever been pregnant or been around someone in her first trimester of pregnancy, you probably know the feeling.
The second time I became pregnant, I was much farther along in my recovery of disordered eating and exercise, so I became more conscious of all things related. During the first trimester I again noticed having to eat when I was hungry and it was smaller meals more frequently. But a huge “aha” moment I had was in the third trimester when the uterus gets so big it begins to push all the internal organs up and basically just smushes them. Therefore, the stomach and intestines are being sat on. Literally. There is nothing, I mean nothing, fun about over-eating during this time. A few weeks ago I did it once. I made lasagna and served myself way too much. As I'm slowing down and looking at the bowl my mind said, “You're full, please stop, no more. Can't. Take. Any. More. Pasta.” But it was sooooo yummy, and there was only about 1 or 2 (okay 10) more bites, so I went for it.
Big mistake.
I had to hold my hand over my mouth and stay still for about 10 minutes while my husband cleared the table. I was afraid it I moved that my baby would do a David Beckham soccer kick and it would all be over. It was truly uncomfortable and I learned a hard lesson.
Hmmmm…..eat when you're hungry and stop when you're full. Who knew?
So, I'm not saying the secret to healing your relationship with food is pregnancy nor am I saying I'm completely the expert when it comes to eating and nutrition, but my main point is there is something to be said about listening to your body for all things including food. Simply put, when I gave my body what it needed in terms of nourishment, I could almost hear it say “thank you”.
Photo courtesy of TowerGirl
Like this Post?
Sign up for updates!