Episode 2: Beliefs: What are they, how they can hurt us, and what to do about it 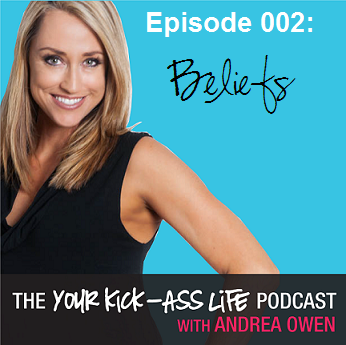 n this episode, I talk about beliefs and how that can be great, but depending on the belief, they can be disempowering and hold us back from truly living a kick-ass life.

I start with some notes I took from Wikipedia and what Wiki says about beliefs:

I think beliefs get reinforced in two ways:

1) Finding evidence. Thoughts create feelings, which create actions, which many times will show us evidence of the original thought. An example might be: Thought- “My husband doesn’t understand me”. Feeling- Frustrated, sad, resentful, closed off. Action- Not open to communication, saying negative things about her husband to her friends, being closed off from him. The evidence is going to show her that he doesn’t understand her because of the action she took. Make sense?

2) Repeating the belief to ourself in the form of negative thinking/self talk.

BIGGEST beliefs that hold us back: