Episode 70: To those of you who don’t think you have any shame (and those who do)

Shame seems to be a buzzword these days, isn’t it? And it’s a good thing– people talking more about the things that hold them back and keep them unhappy.

But, what I see over and over again are women saying, “I get and love when you talk about the inner-critic, perfectionism, and even not feeling good enough…but I don’t get the whole ‘shame’ thing and I don’t think I actually have any”.

And I get it. I think we might think of people walking around with shame that have done unthinkable things. Caught embezzling money from their church and the whole congregation knows. Caught having an affair with their psychiatrist and people are whispering around town about it. Or the kid whose mom is an alcoholic and comes drunk to the school play, things like that. But, what I’ve come to know, is that shame is much more common than we think and most of the time, shame happens in much smaller scenarios. And I hate to break it to those of you that think you’re the exception to shame, but ALL of us have it.

And if we’re not facing and claiming that we have shame, processing it, and learning how to move through it, then shame is owning us and we’re in a constant state of running from it. 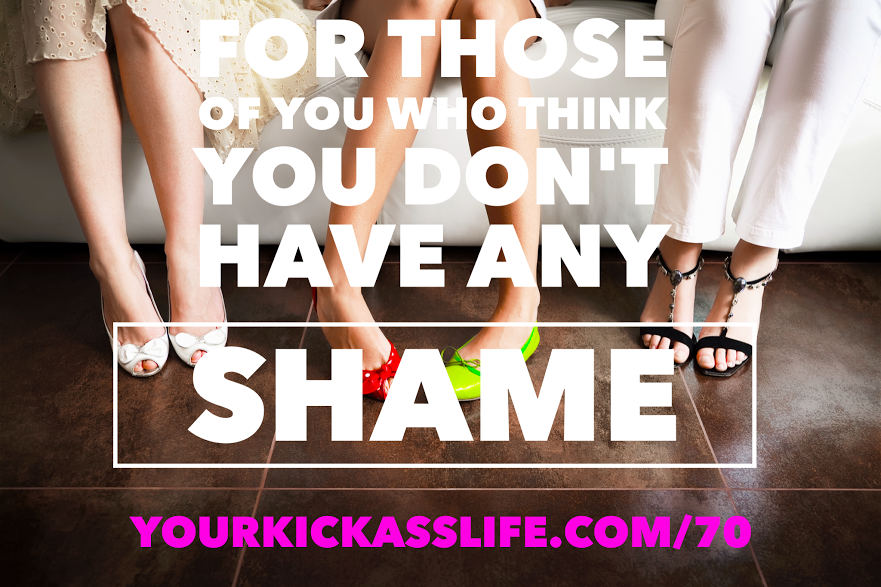 Brené Brown describes shame as “the intensely painful feeling or experience of believing that we are flawed and therefore unworthy of love and belonging – something we’ve experienced, done, or failed to do makes us unworthy of connection.”

And this is a great definition, but I don’t think most of us walk around being conscious that we are feeling “unworthy of connection”. That realization comes much, much later after lots of therapy or reading all of Brené’s books. So, let me do my best by trying to explain what it looks like and how it manifests in our adult lives.

I’ll give you an example of two scenarios that I remember from my own middle school experience. (EEK!)

7th grade. I was struggling in math. My math teacher gave weekly tests, and if you got a D or an F, you got a “tag” on your test, which was basically a half sheet of paper stapled on top of your test that your parents had to sign. My math teacher handed out all the “tagged” tests last, so everyone in class knew who was getting one. It was bad enough struggling in a subject when I really was trying, but then for everyone to know I was failing tests made me feel like a failure and that I was stupid. ← that was shame.

8th grade Graduation day. I wore the pretty dress my mom and I had gone shopping for and I got to borrow her beautiful cardigan sweater with shoulder pads which was too big for me, but it was 1989 so it was perfect. My parents dropped me off in front of the school that day and two of the popular girls (I was not a popular girl in middle school) saw me. One said to the other, “Oh my GAWD, what is she wearing?!” And they both laughed. I had felt pretty and confident that morning, and after I heard that, I felt horrible and ridiculous. ← that was shame.

These seemingly small scenarios are not uncommon, we’ve all had these. Anyone who's been in middle school has stories like mine. Maybe it was with your family, with friends, or at school growing up. As adults, it’s in our partnerships, at work, and even sometimes in our friendships and still with our families.

The thing that all shame stories have in common is that a) they feel like shit. Really, really horrible. There’s no other emotion like it. Like Brené says, “shame is a full contact emotion”. And b) we decide it’s so horrible we never, ever want to feel that again. EVER. We may not consciously think this, but deep inside, we know it was horrible and never want it repeated.

Those two scenarios happened to me more than 25 years ago and I remember those feelings like it was yesterday. I even remember the names of the people involved. Those seemingly small incidents embedded themselves inside of me and started to shape not so much who I was, but definitely how I behaved.

So, what I see happen is that we go through life trying our best to avoid shame at all costs. This is where perfectionism is born, people pleasing, blaming, lashing out, numbing, isolating and avoiding, control, and over-achieving. If you’re participating regularly in any or all of those behaviors, guess who’s driving the bus? SHAME. Brené tells us if we’re not claiming shame, shame is claiming us. And this is what that means. If we think we don’t have any, or not much, we’re probably in a constant state of running from it.

So, now that I just dropped a bomb on you and you’re like, OMG NOW WHAT?!?!? I HAVE SHAME, SHIIIIT! What I want you to do first is think about the behaviors you engage in that I mentioned before…the things you do that you wear as “protection”. Or should I say, the things you do to make you feel protected. (Because there’s no condoms for shame. We actually can’t protect ourselves from it).

Because when we’re engaging in perfectionism, people pleasing, numbing, etc., we’re not actually creating a solution to the problem. We’re, at best, slapping a temporary and crappy band-aid on a wound that really needs more attention. And that attention looks like this:

Sounds simple, right? It can be. And what I know to be true about it all is that it’s messy, you’ll get it all wrong, you won’t get it, you will get it, you’ll get it right, you’ll be proud of yourself, and on and on for the rest of your days.

Hey, guess what? You know how a lot of all this manifests? In your self-talk. Want to make it better? Join me TODAY for my free online workshop: “My 3 Most Effective Ways to Manage Your Inner-Critic”.