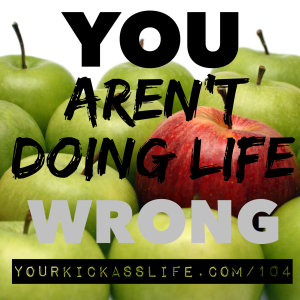 A few weeks ago I hosted the 7-Day Courage Challenge, where hundreds of women come together. I open up a Facebook group and these brave women come in and share their answers to daily challenges and questions I send them. One challenger posted this in the group, and I felt inclined to write about it…

“The thing that I beat myself up over is the fact that I can't seem to get any of it right! I feel dumb saying that, I live a relatively nice life it's not like I'm alone and destitute or anything. I just feel like I've always been capable of so much more and somehow am too defective to make it work. I screwed up college so bad I never graduated. I've had opportunities pass me by because I either 1) start and never finish or 2) don't bother because I know I'll f*** it up. Now here I am staring 40 in the face and what am I? Like, shouldn't I know by now? I get in my head and make great plans and goals and dreams and I just can't get out of my own way to make it work. I don't think I'm doing life right.” -Sara

On the other side of that same coin, if I had to guess, I’d bet you have super high expectations of yourself. You thought you would be at x, y, and z when you turned 40 and you’re not there. Or, you’re comparing yourself to other people that are your age, or even strangers you make up have better lives than you do. My friend Christine calls this an expectation hangover, when we expect things will be a certain way, and they turn out different. So, check yourself. What is “so much more” that you speak of? Write it out. I’m all for you having goals to achieve your version of “success”, but watch out if that version of success is for you, or if it’s expectations that you think matter to make you “worthy” and loved more by others, or if it’s the expectations others have put on you.

Personally, I think everyone is doing life right. Right for them. No matter how much you look your life and think, “Wow, I’m really screwing things up”, or “ I’m not living up to my potential”, you’re still doing life right for you.

And I know this is hard to wrap your head around because we all like to judge others and ourselves. But, I think about Andrea circa 2006. There I was dumped by my husband for another woman, dating a drug addict, pushed away all of my friends, quit my job for said drug addict, everything fell apart, I was broke, in debt and had to move in with my sister (and she DID “have her shit together”, married, job, kids, mortgage, all the things I didn’t have). Some might say I was doing life wrong and that I needed to get my shit together. Hell, I said that to myself. Even in the midst of all that– when I woke up and knew I was making bad choices when I knew I needed to change… I chose to stay. I chose to keep living like I was living, for months.

Now, having had the same thoughts that Sara has, I can tell you this I know for sure: When you’re sure your goals and need to change is for YOU and no one else, you have to get to a certain point where staying where you are hurts more than changing. Where complaining that you’re “doing life wrong” pains you more than going after those opportunities you’ve been passing up. I believe all of us have a pain tolerance, and once you reach your threshold, something breaks lose and you move. And I don’t know where that is for you. Maybe you’ll have a life-changing moment like I did, or maybe you’ll just wake up one day and decide.

You’ll get these invitations often. Sometimes they’re large and sometimes tiny. But, you’ll keep getting them. Invitations to show up in the world, invitations for amazing and thought provoking conversations, invitations to walk away from relationships and invitations to start new ones. And you keep declining the invitations and the more you do this, the worse you feel. Until one day you say yes. And no matter how small, everything changes.

Because you, my dear, were not destined not to show up. It WILL happen when it’s time. And again, I don’t know when that is for you. But, just listen and watch for those invitations. And I’ll tell you something else I know for sure: Don’t wait until you’re brave enough. Don’t wait until you’re “fearless”. There’s no such thing. Showing up and accepting invitations to change is scary-as-fuck. Change can be scary-as-fuck. But, what’s scarier is looking down the line 50 years from now and seeing you said “no” to every single invitation.

One more thing I want to say about your post. You say, “I get in my head and make great plans and goals and dreams and I just can't get out of my own way to make it work.” I’m making this up over here, but you might be making up these GRAND plans and goals and dreams and then you think about taking action, and it’s just too big. I may be wrong, but most of the smart, high-achieving women I attract in my circles think this way: It’s all or nothing. Either I take on the world, or I’m nothing. Either I am crazy-successful, or I’m a lazy piece of shit.

It doesn’t have to be black or white. If you make it that way, you’ll always, and I mean always fail and feel like an epic failure. Look for the grey area. And I know this is hard. I too am a recovering all-or-nothing kind of girl, so the middle ground, and failing, and getting back up is haaaard. But, you have to make tiny, turtle steps to go after what you want.

And if you change your mind about your goals, so what? You’re allowed. Maybe the goals end up being not what you hoped it would be (been there), maybe you realized halfway through you were doing it for other people and not for yourself (been there too, yuk), or maybe your heart is just not in it anymore (yep). But, if you’re quitting because you think you aren’t good enough, or you think you might not do it right, or you think people might think you’re weird, or it makes them uncomfortable or whatever reason that doesn’t matter to you, YOU’RE QUITTING FOR THE WRONG REASONS.

YOUR GOALS AND DREAMS MATTER. YOU MATTER. WHAT YOU HAVE TO SAY MATTERS. AND FOR FUCKS SAKE YOUR TRUTH MATTERS.

And wait– I actually have one more thing to say about this post. You might want to look at forgiving yourself for your “mistakes”. For not finishing college and whatever else you’re still beating yourself up about. You’re putting a lot of emphasis on what those things MEAN about you– but you’re allowed to be kind to yourself, and love yourself, and matter, even if you quit school. Think about what else you making up about who you are as a human based on decisions you made in the past. And work on forgiveness.

So, again, you’re not “doing life wrong”. All this waiting and quitting and feeling bad has prepared you for something. It’s up to you to make that happen in whichever way you’re ready for.

Hey, guess what? You can now access this podcast on Google Play Music Under “Podcasts”. Simple search for “Your kick-ass life” and subscribe.