Episode 114: On burnout, a book update, and more 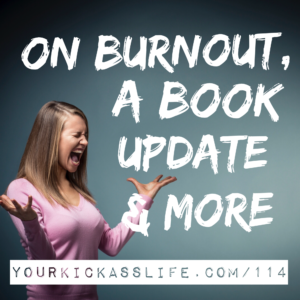 So, I’m in a burn out phase. It happens. I used to beat myself up for getting to a place of burn out, feeling like I must have done something wrong along the way, that I must have not balanced right, must have not delegated enough, didn’t lean in at the right angle.

But, nine years into raising babies, a business, and participating in a marriage, for me– burn out is part of the game. And some self-help experts might gasp and tell me I’m doing it wrong, and that it doesn’t have to be that way, and my response is that I’m doing the best I can, I’m totally confident of that– and this is what works for me.

I kind of look at my life and have found it possible and necessary to have self-compassion because when you do what I do– when you hold space for people emotionally (sometimes a lot of people at once) it’s thrilling and beautiful and amazing and all of those things, and it can also be exhausting. Coupled with other factors– a child with special needs, new big projects and it’s the perfect storm. Luckily, now, I see burnout coming like when the train tracks start to vibrate before you can see the train, instead of how it used to be– not seeing it and letting the train hit me.

So, now when I see it coming, I back out and figure out what I need to do in terms of self-care. What that looks like is that I’ve decided to NOT teach any more classes for the rest of the year.

In other words, I make necessary changes. And I have to grapple with my inner-critic that tells me I can’t put those things off, they’re imperative to my bottom line, and it’s a big mistake. My inner-critic tells me I actually CAN and SHOULD do it all and that other bullshit that makes me crazy.

In other words, I surrender.

YOU GUYS! DID YOU HEAR THAT? I SURRENDER. ME, ANDREA OWEN, THE QUEEN OF “I’M NOT LETTING ANYTHING GO YOU’LL HAVE TO PRY IT OUT OF MY COLD, DEAD HANDS”. I SURRENDERED.

Which is proof, it can be done. Letting it go can happen. Even though I’m pretty sure hell has frozen over and there are pigs flying there, but yep, surrender.

And to be honest, this has been a process. It’s not like I woke up this week and decided. It’s been years of surrendering in the shallow end with floaties on. Easing into to surrender. Little teeny, tiny turtle steps.

Switching gears, part of my burnout was the beginnings of a new, big project: writing my second book. I feel like it’s just like having a second baby– you’re already done it so you know what to expect, but that doesn’t really make it any easier. It’s a different baby, so you don’t really know how it’s going to go until you’re in it.

So, right now I’m exiting the “fuck off” phase and entering the “panic” phase (see below).

I have until December 31st to finish the entire manuscript. Now, this might seem like a long time, but I’d be a lot happier with about two extra months (not possible for a fall 2017 release date). So, from August 29th (first week of school) to December 31st, I will be head-down, eating, sleeping, and breathing writing this book. When I first decided to write it, I said to everyone, “This time it won’t be so dramatic, I’m choosing to have it not be so hard. Peace and ease people, peace and ease.”

Y’all. THIS IS HARD. Elizabeth Gilbert calls this “creative martyrdom” when you make this face 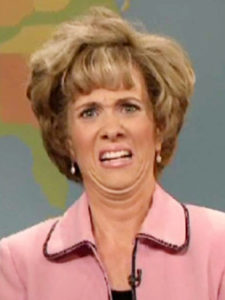 all through your creative process and let me tell you– me and creative martyrdom are doing a disco dance together. We’ve got it down, we are so in sync, we have matching outfits and are LEGIT. CREATIVE MARTYRDOM HAS BEGUN.

On a positive note, because it’s so hard and dramatic, this book is going to SPECTACULAR. I’m so excited for you to read it!

Reminder– you can listen to this episode instead of read it and in the audio I share a story about something that happened several weeks ago between my husband and I. The story I tell serves  two purposes– to let you know shit still happens to me, I’m not perfect, I still get triggered and reason 2: to show you what doing the work looks like.