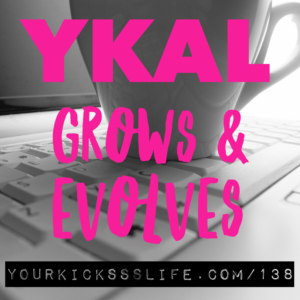 There’s a conversation that’s been happening in these parts of town, aka my life coach friends, healers, those in the wellness industry who run online businesses. And the conversation is: Should we bring politics into our business? Should we talk about this to our audiences?

What I’ve always wanted— what YKAL is— is a place where women can feel good about themselves. Where they can build confidence and courage and be proud of who they are. Proud of how they’re showing up in the world, proud of what they’ve created in their lives, proud of the hard conversations they have with themselves and with others. And at the end of the day– me, Andrea Owen, creator of YKAL has to be that woman too. Proud of how I’m showing up in the world, proud of what I’ve created, proud of the conversations I have to have. And there has been no time in the last ten years of this work I do, where I have been asked more to walk that talk, than now

Let me give you a little backstory. I was a proud Republican for a long time. I voted for George W. Bush in ‘04 and for John McCain in 2008. In Spring of 2009, while pregnant with my daughter, I took a women’s studies class called “Men and Masculinity.” It sounded interesting, it worked with my school schedule, and I needed it for credits to finish my bachelor's degree. Never in my life before had I been that interested in Women’s Studies.

Maybe the Universe was conspiring to change my life.

On the first day of class, we were asked to introduce ourselves to the person next to us. The young woman next to me told me her name and that she was a feminist. I said– trying to be kind of funny, “Oh. Well, then I can tell you now you probably won’t like me.” She asked why and I said, “Because I don’t consider myself a feminist. And I’m a Republican.”

At that point in time, I was 33 years old, and I didn’t know what feminism was, or patriarchy, or privilege (I thought people who had that were the Paris Hilton’s of the world), or even misogyny. That was the first time in a class, I did a lot more listening than contributing to the conversation. In essence, everything changed for me that semester.

One of the things that changed was I realized what I had been so angry about for so long. That the anger and sometimes rage I had– for not being taken seriously because of my gender, for being sexually harassed and assaulted, that there was a name for what I was really fucking pissed at. And it was sexism, misogyny, and patriarchy.

So, back to this conversation with all of you. If you follow me on my personal Facebook page, you’ll see my public posts are vocal about politics and what I stand for and my opinions. And I’ve mostly kept them out of here and even my YKAL social media accounts.

And this is something I’ve been thinking about. Why? Why have I not been more vocal? And the reason is my own shit. There is no guidebook for “How to be a teacher of personal development/life coach with a podcast while the world as you know it catches on fire.” And I panicked there for a minute. I kept looking around like HOW DO I DO THIS? I don’t know anyone who does exactly what I do and is talking about activism and doing it well. Most of us are either not talking about it at all, or throwing all of themselves in it. It’s an awkward place for us to be. I want to do it right; I want to do it well for you and for the next generation. But, what I realized is when there’s a revolution, you just do it. When you’re fighting the resistance, you just jump. It’s non-linear, it’s messy, sometimes I’ll get it wrong and sometimes I’ll get it right. I’ll clean up any messes I feel I have made and keep going. That’s leadership.

Here’s what I want you to know: I am not here to tell you to agree with me. I am not here to tell you what to believe about different world issues. That’s up to you. What I am here to do is to educate. And maybe, if you’re someone like how I was sitting in that class, someone who doesn’t identify as a feminist or have any concerns for women’s rights, someone who thinks we have nothing to worry about and real women’s problems are in other countries we don’t have to worry about– maybe like me, you can listen and learn. Maybe your mind won’t be changed, but if nothing else, you’ll learn.

To be perfectly honest, in future blog posts and podcast episodes that are about social justice and social change issues, I’m not trying to change the minds of people who are dead set with opinions opposite mine. If they do change their minds, great. But, whom I’m speaking to are the women that so far don’t know much, if anything about these topics. Or, maybe they’ve only listened to the ideas and opinions of their husbands or parents, and haven’t looked at other ideas and opinions and haven’t really formed one for themselves yet. Or, maybe they just haven’t cared enough. Nothing “political” has ever affected them in their lives. I know this may be a lot of you and this isn’t at all to shame you. It’s common, and everyone has to start somewhere.

This is not comfortable. This is awkward. For some of you, you might be feeling guilty. And if so, good. I for one, have been wracked with guilt. That tells me something isn’t right. Guilt can be good in that it’s information telling us something we’re doing or have done might not be in alignment with who we really are. But, sitting in guilt and talking about our guilt gets us nowhere. And trust me when I tell you marginalized people do not care about our guilt. Our feelings do not hold a candle to what is going on in their lives.

So, what does this mean for the podcast? Well, here’s where all the reading, thinking, and processing over the last few months has made me realize:

Among other things, I help women heal and rise up from the wounds that trigger them. That’s where help with negative self-talk, feeling good enough, recovering from perfectionism, and hiding/numbing out comes from. What I realized pretty early on in my practice is that the root of the problem is more often than not cultural and familial problems and injustices. More specifically, what’s being passed down from generation to generation and what’s being passed around in our cultures. Some of that looks like our culture accepting of notions like:

Girls are mean to be seen and not heard.

Your body should be thin, and anything less than that is bad and ugly.

To be perfect is the ultimate goal.

No one wants to hear about your problems.

You might have heard me repeat, “You don’t have to inherit dysfunction.” And I believe that wholeheartedly. But, what I’ve come to realize is that I can talk about healing our individual “dysfunction” all day, but if I’m not also addressing and trying to dismantle the root cause of it– the systematic way women have been oppressed for many, many years– I’m taking the fucking long way.

And you know I don’t have time for the bullshit long way. Nor do you.

So, is this podcast shifting into more talk about politics? No, it’s not. But, it will be shifting to talk more about social justice issues and women’s issues. And not just talk. You won’t hear me just complaining and shaking my fist at the patriarchy. You see enough of that on Facebook. It will be about awareness, action and where I can offer one— a solution.

Because I want to make this world a better place than it was when it welcomed me in. And I hope you’ll join me on my quest.

Resources from this episode:

This episode is brought to you by, The Self-Love Revolution: Master’s Course Retreat! Join Amy Smith and I for four days of deep diving, new friendships, learning tools to start liking and even loving yourself. Payment plan and early-bird price end on February 23rd! Check out all the info here: