Episode 158: How to be a badass at making money 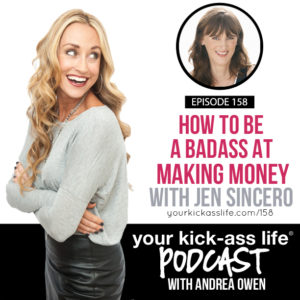 In this episode, Jen Sincero returns as a guest of the Your Kick-Ass Life Podcast. Jen is a #1 NY Times Bestselling Author with her book, You Are a Badass: How to Stop Doubting Your Greatness and Start Living an Awesome Life and she’s helped countless people transform their personal and professional lives.

Last time Jen was on the show, she shared all about the power of surrender, why creativity isn’t limited to just art, and powerful exercises to get clear on who you are and why you’re here. Today, we’re talking about something we all face: how to uplevel your mindset around money, identifying the fears you’re carrying and how to overcome them so you can live your best life possible.

Jen reveals today what you’ll learn from her latest book, You Are a Badass at Making Money: Master the Mindset of Wealth. With a title like that, you know this is an episode that you need to tune into!

In this episode you’ll hear:

Ready to overcome any limiting beliefs you have around money? Jen’s a true badass who knows her stuff! You’re going to enjoy (and learn so much) from this episode of the show….

Resources from this podcast:

Episode 71: How To Be A Badass, with Jen Sincero 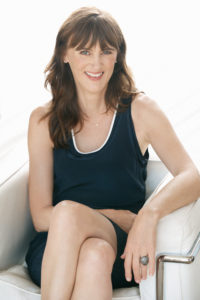 Jen Sincero is an author, speaker and success coach who’s spent over a decade helping people get their poop in a scoop via her public appearances, newsletters, online products and books. The continued global success of her #1 New York Times Bestseller You Are a Badass, which has sold over a million copies since its release in 2013 and is available in over twenty languages, has made Jen a mighty and trusted voice in the world of self-help. The next book in the series, You Are a Badass at Making Money (2017), was inspired by Jen’s story of self-transformation in which she went from living in a converted garage eating dollar tacos every night to owning her own seven figure business and traveling the world in style.

Jen is a much sought-after keynote speaker who has shared her signature brand of motivational comedy with everyone from entrepreneurs to multinational corporations to non-profits to educational institutions. In 2011 she sold most of her possessions and spent the next three years running her business from all corners of the globe, writing, speaking, coaching and encouraging people to live lives of unbridled awesomeness.

Jen and her work have appeared in a variety of media outlets including the New York Times, The Dr. Oz Show, Oprah Magazine, Success Magazine/Radio, Comedy Central, Forbes, Fast Company, Bloomberg, Interview, Cosmo and The Howard Stern Show. She lives in Santa Fe, New Mexico, and can be found on the web at JenSincero.com.