Episode 247: Conversations About Shit That Matters with Unqualified People: On White Supremacy and Unconscious Biases 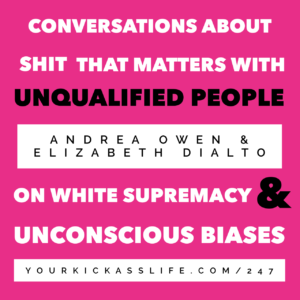 This episode officially kicks off a series I’m calling Conversations About Shit That Matters with Unqualified People. Today, my friend Elizabeth DiAlto and I are talking about doing the work in terms of racism, white supremacy, and more.

You might wonder what this has to do with personal development? Well, the deeper I get into my own personal development work and even trainings, the more I can see that the root of the problems many of us face (feeling not good enough, lack of confidence, etc.) is rooted in white supremacy and patriarchy. And trust me when I tell you there was a time many years ago when I would have disagreed with that. However, back then I hadn’t done enough work, nor (although largely unconscious at the time) had I wanted to admit that a system that I largely benefitted from could be the problem.

One of the heavy topics I am passionate about dismantling is rape culture. The system that normalizes and trivializes the sexual assault and harassment of women. The idea that women’s bodies are disposable and that sexual violence is normal. A couple of years ago I realized that there is a direct connection from rape culture to both patriarchy and white supremacy, and so began my work over here on my own, so I can better educate. This episode is the very beginning of that.

Also, as I mention in this episode, I have two solo episodes coming up in the next few months about core beliefs and inner critic that were suggested by Patreon members. I’ve decided to let go of advertising and sponsorships on the podcast, but in order to still be able to support the costs of the show, I’ve introduced ways for listeners to do that. When you become a Patron, there are perks! Including being able to suggest show topics, getting your personal development questions answered on Listener Q & A episodes, monthly Ask Me Anything calls, book giveaways and more (Last AMA call I answered a question from one of our patrons who had a question about an uncomfortable situation with her friends that she wanted my advice about. The month before that, someone asked about starting her own coaching business. I’ll answer virtually ANY question you have on those particular calls)!

Head on over HERE to check out the different tiers and I thank you for supporting the show!

Back to today’s episode! Although this isn’t a teaching/expert interview episode, Elizabeth and I explore some important topics, including:

Resources from this podcast: