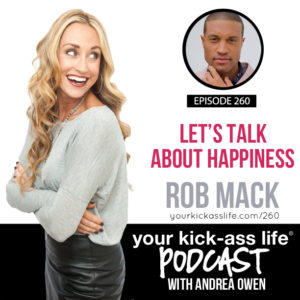 I am ecstatic to introduce you to this week’s guest, Rob Mack. Rob is an ivy-league-educated Celebrity Happiness Coach, Positive Psychology Expert, Published Author, and TV Host/Personality. He just exudes peacefulness and while it looks like it comes naturally to him, he works hard at it.

Rob joins me to talk about prioritizing peace, happiness, love and joy and how to focus on feeling better. We also talk about negativity bias, being comfortable with our uncomfortableness, being stuck in an identity story and some ways to let it go.  Rob is such a delight. And, y’all, he is a very snappy dresser too!

In this episode you’ll hear:

Resources from this episode:
Rob’s website
Rob on Instagram
Andrea on Good Morning, LaLa Land
Melanie Whittle
Episode 193: High Functioning Co-dependency with Terri Cole
The Mentorship is Coming Back!  A New Mentorship Group is rolling out in early 2019! Get on the interest list now → Email support@https://andreaowen.com with the word “Application” in the subject line. Read more about it below…

Robert’s work has been endorsed by Oprah, Vanessa Williams, and many others.In addition to hosting and producing “Good Morning LaLa Land” – a daily, live-streaming morning show focused on positivity and empowering women – Robert is a featured on-camera expert & consulting producer for “Mind Your Own Business” on OWN and a Celebrity Love Coach on “Famously Single” on E!

Robert has been a featured guest expert for The Today Show, Good Morning America, The Balancing Act, CBS Early Show, She Knows, and AskHer.com. He and his work have been featured in Self, Health, Cosmopolitan, Glamour, Upscale, and many other magazines.Robert’s first book, “Happiness from the Inside Out: The Art and Science of Fulfillment,” is celebrity-endorsed and critically-acclaimed. It has been translated into various other languages, including Chinese.

Prior to his current work, Robert worked as a Big 5 Management Consultant and then later as a professional model and actor.

Robert received his Bachelors of Science in Psychology from Swarthmore College, conducted his MBA coursework at the University of Miami, and attained his Masters in Applied Positive Psychology (M.A.P.P.) from the University of Pennsylvania, an ivy-league institution. Robert’s Masters degree in Applied Positive Psychology, the science of happiness and success, is a degree held by only a few dozen people in the world.

Over the last few months I’ve had the complete honor of taking a small group of women through life changing work. That group is The Mentorship and coming up in 2019 I’ll be offering it again with some slight variations. Long story short, it’s only taken me 8 years to realize that facilitating these types of groups (small, intimate, with deep transformational work) is my zone of genius. ?

The women in The Mentorship are setting boundaries, speaking up for themselves, and practicing self-compassion (instead of beating themselves up or comparing and depairing). They are starting new businesses, or getting better jobs. They are cheering each other on and themselves. They are making rich, new friendships and asking for help. Basically, they are living their version of their kick-ass life.

A new group is rolling out in the new year, which includes a two-day workshop retreat here at my house in North Carolina. (!!!) We don’t have a page up just yet, but if you want to be one of the first (I’m limiting the amount of women who can come in), so if you want an application and a call with me to see if it’s for you, simply send an email to: support(at)https://andreaowen.com and Emily will help you out.