What my 20’s meant to me: Friendships 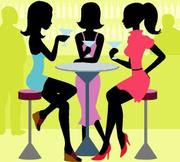 This weekend I was having a conversation with one of my best friends, Annamaria Loven. We were discussing friendships and how sometimes it's necessary to “break-up” with a friend. The dynamics of this are interesting because in many ways it's the same as breaking up with a boyfriend. In my 20's I had a friend that I worked with. She was fun to hang out with, but after a few months the friendship got a little strange, I didn't trust her and just plain wanted out of the friendship. I was too chicken to tell her so, in fear of hurting her feelings (I mean what do you say, “This just isn't working out, I think we should see other friends. Let's still be…oh, wait a minute, no I don't want to be friends, so just go away, please.”) so I just ignored her calls and made excuses not to see her. I know, not the most mature way to handle it, but that's what I did. Years later I ran into her and I thought maybe she changed, that things could be different between us and I gave her my number. She never called. I guess I had it coming.

But with that situation I came to realize that some friendships in our life are just not worth having. Why do we keep them around? Because we think it will get better? Because we don't want to hurt our friends feelings? Who knows, but truth be told, if it's toxic, it's toxic and you may as well throw it out. I don't have the answer on how to end toxic friendships, but if the friendship isn't supportive and empowering to you, then walk away. And the great thing about friendships is that you can reengage them later if it's right. I have had 2 really good friends where this has happened. At one point one of my friends let me go because I had so much drama in my life and she had her own personal challenges as well. She could not for her own sanity be supportive of me so she took a break from me for a few months. Yes, I was hurt, but I respected her for it and in retrospect, she couldn't be the kind of friend that I needed at that time, so why should she have to fake it? It's not like she was my only friend to lean on. Which brings me to…

I believe in your 20's is when you begin to discover which kind of friends you have and for what reasons. Any time you go through a major life change (marriage, divorce, death of a loved one, major career change, etc) you really do find out not only who your good friends are, but what role they play in your life. For instance, one of my friends will tell it like it is, no matter what. She is direct and honest. Sometimes, if I'm not ready to hear that kind of support, I don't call her. And that's okay. Another friend I have will never give advice, just listen and tell me she loves me and supports me even if I did something crazy. This is also the friend I could call from prison to come bail me out in the middle of the night and I wouldn't even need to tell her what I did. I have a friend that I couldn't call to pick me up because sometimes she's a flake, (I love her anyway), but she knows it and I love her because I can tell her anything and she would never judge me.

So, I guess the most important lesson is if you have a friendship that isn't serving you, it's time to get rid if it. It's like that rule of an item of clothing: If you haven't worn it in a year, get rid of it.