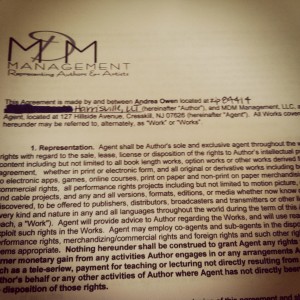 It’s official! One of my top choices for literary agents has said YES! Michele Martin od MDM Management has taken me on as a client and is ready to pitch my book to publishers SOON! ALthough I’ve been writing this book since January, this part seems to be moving FAST!

To be perfectly honest with y’all, sometimes I feel like this is happening to someone else. I mean, I’ve wanted this for so long, and this is my one big, badass goal. Yes, I have other goals, but this one has been around for about 25 years, so there’s a little bit of emotional attachment here.

I’ve been thinking a lot lately about the finished manuscript. There’s that quote floating around, “Write the book you want to read” and that’s what this has been all along. It would be that book I wish someone would have given me 10 years ago. The one where each chapter would have been a smack over the head. And as I was writing it I was almost there. The book is written in my natural, irrevrent voice, yes, but there is a little part of me that’s holding back. I was in the car one day listening to some corny country song (don’t laugh, I DO like country music) and the song was about life and leaving your legacy or something. It made me think to myself- What if this book were my last living legacy? I know it sounds morbid, but what if after I wrote it, I died? And this was my children’s best piece of my message? For all the people that followed my blog, this book was the last thing they would get to read of mine? Would I be writing it exactly the same?

And the answer was no.

So, onward I go! It could take months and months until the book is sold and since we’re looking at the holidays, who knows. But, as always, ass kickers, I’ll keep you posted!