How I Manifested a Book Deal

This is one of those posts that I even still shake my head in disbelief about. I mean, I have a TON of evidence that the Law of Attraction works, but this one takes the cake for 2012.

If you don't already know, I started writing a book in January of 2012. I started a blog about it so if anyone was interested in following the journey, they could do so.  In June I started the book proposal which I foolishly assumed would take me a month or so to complete. In November, I was still working on it. My goal was this:

I wanted to have the proposal done, have hired an agent and have said agent shopping publishers by the end of 2012. Lofty? Maybe, but I was determined.

On October 17th, I wrote this:

Asking for a random $1000 isn't that crazy…but the book publisher contacting ME, was. It's like the real story of Charlize Theron getting discovered at a bank. One of those highly improbable situations. The next few days I filled out the journal with different Wild Hair Intentions.

On October 23rd, 6 short days after I wrote the above intention, I was greeted with this email…

I seriously almost shit myself.

I had about 10 seconds of excitement, then the questions:

What if it's a scam?

What if she ends up hating the book after she hears about it?

What if it's a joke?

I quickly forwarded the email to my book proposal coach, Debbie Reber, who assured me that this is in fact a legitimate publisher. It was only then that I remembered that I had asked the Universe for this a few days before.

Before you get all excited and start your own list of Wild Hair Intentions, I need to tell you this wasn't the ONLY thing I did to manifest this. It started MONTHS before. And what it comes down to isn't just that I wanted a book deal. That's just the goal. What I chose to focus on was the feelings and emotions I want and intend to get from this book deal. I was asked by other coaches and asked myself:

WHY do I want this? What's so important about it?

Specifically, what do I want?

I've made endless lists of “wouldn't it be awesome if's” that include getting the call from my agent that we have a deal, being done with the final edits of my manuscript, getting the box of finished books delivered to my house, watching the book become an Amazon best-seller and more. The feelings behind it are: Happiness, service, fulfillment, validation, and excitement.

As I write this post, that publisher that was interested has made an offer. I can't give any more details than that, but stay tuned!

I'd love to hear in the comments how you manifest wild intentions, or what exactly you WANT to manifest!

Wanna get what YOU want? Join me starting January 10th where I'll teach you EXACTLY how to achieve your goals by using the method I've just described, plus more… 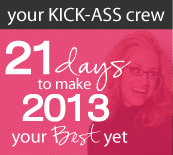