9 Ways to Get Over Your Ex

Thanks for reading this post! If you're brand new around here, please note that getting over heartbreak is no longer the central theme of my work. More recently, I write books, (here and here) host a podcast and you can look around the site to check out the retreats I host for women, as well as the private work and group classes I host. 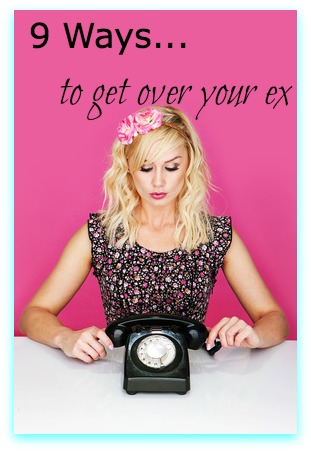 The first time I got dumped I was 14. It was my first boyfriend and after about 6 months of dating, he walked me to class, handed me a note and that was it. Tears streamed down my face in math class as I read, “I feel like we’re just friends that hold hands.” In other words, Mr First Boyfriend dumped me because I wouldn’t go to second base with him.

The second time was my next boyfriend. I was 16 and we had been dating a whole year. He dumped me to “spend more time with his friends” which the next day I found out really meant he wanted to date a cute freshman that had been flirting with him.

Then when I was 30, my husband dumped me. So, it’s fair to say I’ve had some experience in this department.

(BTW, this is sounding like I’m a total hot mess, no?)

However, this post isn’t about poor me and all the boys that have broken my heart. Over the last few years I’ve received many emails from women all over the world, pouring out their hearts about some guy that dumped them. They tell me everything they did for this guy, that they are so broken hearted and they end the email with “please help me, what should I do?”

While every situation is unique, I’ve compiled a list of things that in retrospect, I’ve learned. I’ve made some mistakes in my journey to healing that have dragged out the process. But, here are the most important things I’ve learned along the way:

Don’t just unfriend him on Facebook, block him. Don’t google him, don’t drive by his house, don’t send him innocent “hi” texts, don’t tell your friend to tell him you’ve been thinking of him, nothing. Yes, it will be sooo hard. And you may slip, just just try harder next time. Think about this: Do you feel GOOD when you do any of this behavior? Do you think any of this is helping you heal, or helping him want to be with you, or helping anything? Truth: The only thing you’re getting out of this is feeling worse about yourself and your situation. Is that what you want? Your choice. No stalking, no following, no “checking in”.

#2 Give yourself enough time to grieve.

When my ex husband dumped me, and after the fog had cleared, I picked myself up and looked for the fast track to heal. I went to therapy, read self-help books, joined support groups, all the things I was supposed to do during a divorce. When people said, “The only thing that will heal you is time” I wanted to get all Chuck Norris on them and punch them in the face. I couldn’t control time, so I wanted that theory to die. I rushed through the healing process like a banshee and celebrated each month that went by, because to me it signified that I was that much better. Then one night I had a dream about him, that we were still married and actually happy. Talk about a tailspin. I was FURIOUS that I had been set back, I couldn’t stop thinking about him, I cried and frantically called my therapist. “WHAT THE HELL IS THIS” I asked her. And she so calmly told me, “Remember when I told you the grief process is a process? You go through it over and over again, possibly for years and years to come”. Well, that was NOT what I wanted to hear. However…I listened and I surrendered to the feelings. Not right then and there, but over time. Reality was, I had lost a big part of my life. It was the death of a marriage. I am not superhuman, I cannot control my grief. Once I let that go, it got easier.

This one  might sound a little cliche, but it’s helpful. Left alone with nothing but boredom and time, the mind can wander, we can start feeling like a victim and depressed, start scheming up ways to get him back, start plotting revenge or other non-healthy schenannigans. The best thing to do here is take out your calendar and start filling it up. Call all those people you’ve been meaning to call, start that new exercise thing you’ve been wanting to do, cook meals you’ve never cooked, volunteer where your heart tells you to, anything. An add on to this is to make plans for your future.  Set goals, break them down, plan them out. Strategize and list out your “hell yeses”. What do you want to do that you weren’t able to do when you were attached? This is your opportunity to do what YOU want.

#4 Look at the experience as a gift.

This might sound like the stupidest thing you’ve ever heard, especially if you’re in the depths of your break up, but hear me out. A change in perspective has the ability to move mountains. What if you could just think about what you’ve learned from this experience? You might be thinking, “Well, I learned that he’s a major asshole”, and that’s fine, but I want you to focus on YOU. What did you learn about you? What did you learn about relationships? About what you will and will not tolerate? What do you need to own? If all you can come up with are not-so-nice things about yourself, follow up each of those “learnings” with, “Is that really true?” For example, if you think that what you learned is that you’re just bad at relationships, challenge that with, “Am I 100% sure that is true?” My point it to think critically about the experience and take from it what you can do to become a better you.

#5 Don’t allow your ex to string you along.

I’ve been on both ends of this. The stringer and the stringee. Your ex may send you mixed signals or keep being undecided about what he wants. And you and your heart get bounced around like a ping-pong ball. Truth: Your ex may very well be confused, but he’s also getting his ego rubbed by you sticking around pining for him while he figures out if he wants to be with you or not. If the person stringing you along isn’t at least 99.9% sure he wants to be with you, leave his ass. He may be a master at giving you one glimmer of hope that sooner or later he’ll want to be  with you, but in the meantime it’s your heart that is being abused, neglected and disrespected. Total dealbreaker.

#6 Stop “being friends” or sleeping with your ex.

It still baffles me to no end when a woman is still sleeping with her ex, and is under the impression that this is the answer to get him back. Truth: He’s sleeping with you because you’re willing, not because he’s thinking about getting back together. I don’t care what kind of new tricks you’re showing off in the boudiour, he’s only in it for the s-e-x. What you’re getting is confusion, false hope, emotional chaos and maybe an STD because he’s probably dating other women. And the thing with being friends….what do we usually do with our friends? Confide, talk about who we’re dating now…do you really want to do that with your ex? Do you want to hear about which girls he thinks are hot on match.com? If you can truthfully say you have absolutely no emotional attachment to him at all, and it doesn’t hurt one bit, knock yourself out. But, in the beginning, when you’re still hurting and grieving, cut your ties completely. You need the space.

I’ve written before about being totally and completely “over it”, and many times I don’t think people get to a place where they are 100% non-feeling about their past relationships. Perhaps it’s like scar tissue on their hearts….there is a great deal of healing, but there is still some residual sting associated with it. But, it doesn’t have to mean anything. It doesn’t have to mean that you still want to be with your ex, or still have feelings for that person.  It just means that you’re human, you had an emotional, probably intimate attachment to this person and that’s okay. It’s what you do with those thoughts is what counts. If the thoughts of your ex send you tailspinning into grief, or hating yourself for what you did in the relationship or because he broke up with you, that’s where it can get dangerous (see #9). But, if you still think of this person and have some minor hurt feelings over it, in my opinion, it’s normal.

#8 Allow yourself to be (are you ready…) alone.

(Is Kim Kardashian reading this?) Okay- if you’re someone who jumps from one relationship to another, listen up.  Dig deep and get honest with yourself about why you seem to always be in relationship.  For me, my hit-over-the-head-with-a-brick “aha” moment was admitting I was a love addict (yes, it’s a real addiction, not just a Robert Palmer song). It might not be you, but it’s worth looking into. Individual autonomy is imperative for a healthy relationship. If yours keep failing, perhaps it’s time for you to spend some time alone. To experience the lonliness, to find out what you really want in relationships, your life, your future. Are you in relationships for the sake of being in one? Because being alone is harder? Guuuurl, I’ve been there. Truth: You will spend a lifetime looking for “the one”, trying to make the relationship work, and pulling your hair out wondering what the hell is wrong with you or him. When the answer is there is nothing wrong with anyone except that you don’t know yourself yet. Which brings me to my favorite….

#9 Take inventory about how you feel about yourself.

The grand finale and what I think is THE most important thing in getting over your ex. I’ve written about this several times before, and even started a revolution with my BFF on the topic of self love.
The thing is, we get so caught up with the other person during a break up, and the relationship itself, that we tend to forget about ourselves. It might seem easier to try to control the other person, and to think “if only we didn’t break up- THEN I would be happy”. But, ask yourself, are you happy with you? Are you proud of who you are? Do you embrace exactly who you are, all of you- the good and the not-so-good?
How you view yourself, how you feel about yourself and the conversation you’re having inside your head about you, is a million times more important than any outside relationship. I don’t care who this guy is and how much you love him. YOUR love for yourself trumps him. Always.
Wanna get over him? Start with you. Wherever you are is fine. Perfect, even.