I did it because I was scared

In my last couple of posts I’ve mentioned that I’m training for a sprint triathlon. I’m doing it because as a runner, this will be a challenge and the fact that I always thought it was ballsy to say the least to swim in open water. Growing up in southern California, I’ve played in the ocean countless times, but it wasn’t until I became an adult that I became afraid of the open ocean. How does that make sense? I’m not too sure.

First things first, let me tell you about my pool drain phobia. Just typing those words makes the hairs stand up on the back of my neck. I had a boyfriend in high school who thought it would be funny to try to drag me down by my ankle to get close to it. He didn’t like it when he got kicked in the nuts. (Hey, it wasn’t totally on purpose. I’m not responsible for flailing arms and legs when I’m freaking out).

I don’t do Jacuzzis because of the sheer size of the drain and when the bubbles are on, I can't see it. When I do laps in the pool, I CANNOT swim in the lane that goes directly over the drains. And if there is no one else in the pool, I won’t go in. Even if the only other person is a 95 year old Asian lady bouncing around on her noodle, I feel safe. I mean, if the drain monster is going to get me, at least she can go get help.

As I’ve been training in the pool, the drain thing has gotten a bit easier to deal with. It stays put, so I’m happy. On Sunday, I signed up for a swim clinic for beginners. I was so sick with anxiety, in the days leading up to it I almost vomited twice. Two days before the clinic, this was my Facebook status:

Less than 48 hours until I do my first ever open water swim, a practice before my first triathlon in October. Thinking about it makes me want to vomit and I can't breathe. But, I'm doing it anyway. Bobbie Vrastil-Solomon, I apologize now for any drama I bring.

After I posted it I suddenly realized I had a choice in the matter. It wasn't really me who was scared. My gremlin had been shouting in my ear, “Who do you think you are, competing in a triathlon? You'll probably come in dead last!” Therefore it was easier for me to just be scared. So I declared I would leave my gremlin at home and bring my badass self to the swim. Done!

However, on the drive there I almost turned around and went home. My gremlin said, “That's really cute, that thing you said about leaving me at home. The open ocean is scary, mean and there's no side of the pool to hold onto when you choke on filthy polluted water and the piranha come to feast on you.” Nice, isn't she? But, then I got to thinking.  No, really. I DO have a choice here. I have a choice to be scared. It's a mind game. Plain and simple. Not to mention I was creating all the drama surrounding being scared. Drama feeds on drama. I don't care if it's about a pool drain, or a bad relationship, throwing gasoline on a fire called drama is just going to get you more….you guess it! DRAMA!

So, I went. I wasn't exactly choreographing synchronized swimming routines and I avoided the buoys with all the crustaceans on them (gross and scary). And it helped that Bobbie was a great coach and hey- there were even other scared people there too. So, I didn't feel like a total weenie. And here we are. Alive! 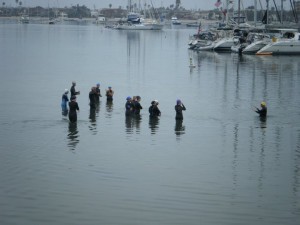 Moral of the story: